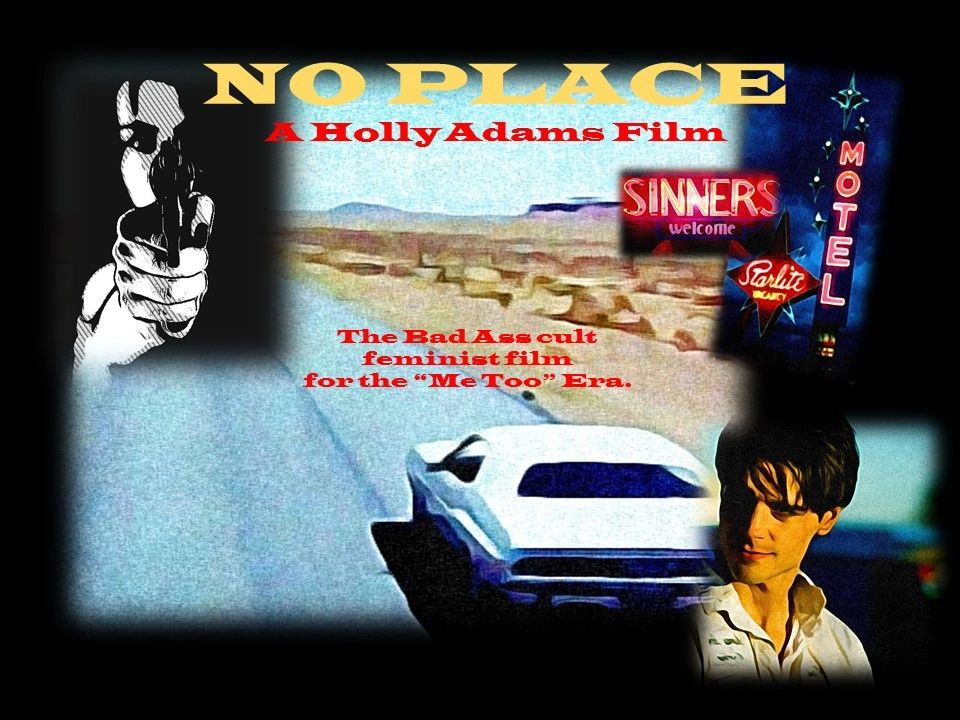 Holly Adams is the #femaletarantino

My films dare to express what women have been silently thinking for years.

No Place is a road picture drama feature film.

Two desperate teens flee their traumatic  pasts trying to outrun the law until they find that the home they seek  is within each other.

After discovering she is pregnant with his child, 15 year old Mary kills her father, taking off with his pistol and cash.  In the meantime, 17 year old Joe has just accidentally poisoned his obese mother. He’s got a car but no gas, she’s got cash and needs a ride. They take off west together to make  it big. But they share a moment of recognition when it is revealed that they are each fugitives wanted for murder. With Mary’s uncles and the law hot on their heels, the teens disguise themselves as newlyweds to great effect. Joe discovers that he and Mary have matching birthmarks which complete a circle when her hand is placed over his heart. He vows to take care of Mary and the baby and buy themselves a home of their own one day.  But just as they embrace, Mary’s Uncle Jimmy guns them down. With her  hand over his heart, the bullet pierces the circle and our twins of  misfortune are immediately swept into a swirling black abyss with a light at the end  growing ever bigger, a doctor’s hands reach into the abyss coaxing an  infant out of a womb. He slaps the baby’s behind and she spits out a bullet. Joe and Mary have just been reborn as one person.

Through darkness we must go to see the light again and sometimes two equals one.

What our fans are saying!

"Those are the words I was looking for, I love a Holly Adams film"     B. Shelton

We are so grateful for the Fiscal Sponsorship of:

From the Heart Productions, a 501(c)3 non-profit who has partnered with Network for Good  to provide fiscally sponsored independent filmmakers with a fundraising platform to increase donations to their projects.  Any donation you make is a tax write off since we have non-profit status  through From The Heart Productions!!"